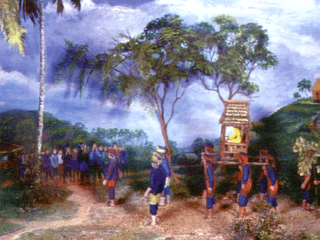 In 1424, after the death of Sultan Megat Iskandar Syah, his son that is, Raja Tengah who was also known Radin Tengah was made the third ruler of Melaka. In 1424, Raja Tengah and his wife made their first visit to China to inform the Emperor of China about the death of his father and his succession to the throne. In 1433, Raja Tengah together with his wife, children and younger brother called Radin Bala with a royal party of 228 people left for China with Admiral?s Cheng Ho fleet. They stayed in China for two years. From the year 1434, the Chinese empire began to change its policy, ceasing to have a keen interest in other countries including those in South East Asia.


During the reign of Raja Tengah, a religious Muslim Man known as Saiyid Abdul Aziz came to Melaka to spread the teaching of Islam. The ruler of Melaka together with his senior officials and the Malays of Melaka listened to his teachings. He also proposed that Raja Tengah used the Muslim name of Sultan Muhammad Syah.


Not long after, Sultan Muhammad Syah appointed several senior officials with responsibilities for internal administration. Among them were a ?Bendahara?, called Seri Wak Raja; the younger brother of the ruler, Radin Amin was made the Prime Minister and given the title Seri Amar Diraja. Tun Perpatih Besar, the son of Tun Perpatih Permuka Berjajar of Singapore was made the Chief Treasurer with the title Seri Nara Diraja. Seri Nara Diraja married the daughter of Seri Wak Raja and had a daughter named Tun Rana Sandari.


Mani Purindan, a wealthy man from India visited Melaka with a fleet of seven ships and was well received by Sultan Muhammad Syah who regarded his status as that of a minister. Mani Purindan then became the son-in-law of Seri Nara Diraja when he married his daughter Tun Ratna Sandari. They had a son by the name of Tun Ali and a daughter named Tun Wati. Tun Wati was later married to Sultan Muhammad Syah and had a son named Raja Kasim. The Sultan later married the daughter of the Ruler of Rokan and had a son called Raja Ibrahim. Although Raja Ibrahim was younger than Raja Kasim, he was made successor to the throne of Melaka by the Sultan at the request of his mother the Princess of Rokan, the Queen of Melaka. It was also during Sultan Muhammad?s reign that Tun Ali, the son of Mani Purindan was appointed Chief Treasurer of Melaka with the title Seri Nara Diraja to replace his grandfather Seri Nara Diraja Tun Perpatih Besar.


Besides appointing some senior officials, Sultan Muhammad Syah was the first ruler of Melaka to introduce customs and traditions and also prohibitions regarding royal status in Melaka. Among the customs and traditions were the use of umbrellas, presiding in court, paying homage, visiting and departing envoys, conferment of titles, royal departures, royal audience, royal banquet, royal departure to the mosque and ?Hari Raya?.


Among the prohibitions introduced on the commoners by Sultan Muhammad Syah included the use of yellow materials, building a house or boat, wearing the kris, gold, jewelleries and attire that can be worn by commoners. Anyone who did not comply with these prohibitions would be fined ?a kati five? or ?denda pati?. The customs and prohibitions that were introduced by Sultan Muhammad Syah were still being used by the present Malay rulers but have been more relaxed.


In 1444, Sultan Muhammad Syah died after reigning Melaka for twenty years. He left behind two sons that is, Raja Kasim, the son of Tun Wati and Raja Ibrahim, the son of the Princess of Rokan.
Posted by aiSha at 11:20 PM